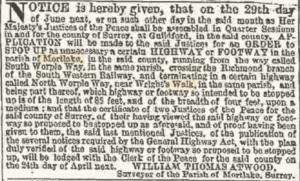 The cottages on Wright’s Walk were build between 1850 and 1870 following the medieval strips of Ewe Furlong. The path, which ran from Mortlake to East Sheen was named after an 18thCentury gardener in 1810. Charles Hailstone in Alleyways of Mortlake and East Sheen writes: “Takes its name from a Mr Wright, a gardener working the land on the Alder Road site in 1780s, but about whom nothing further is known.” This however is not the original path, the original route ran from Back Alley (today’s Vineyard Path) to the (South) Worple Way and adjoined Mortlake High Street by Guns Alley. “There was”, says Hailstone, “a stile at each end, one of them put up by Mr Wright, and when these were removed horses and carts were able to use the path so that in wet weather it was churned into mud.” The route was changed in 1842 and continued to be used even after the railway tracks were laid down, even though no crossing had been made. This was bad news for the railway company as Richmond magistrates fined the company 40 shillings for obstructing the right of way. On March 26, 1847 an advertisement appeared in The Times announcing that from June 29, 1847 a stop up order would be in place – allowing the railway company to close up this footpath. Local magistrates a P Page and William Gilpin had declared the crossing “highly dangerous to the inhabitants of Mortlake”. But as events more than 45 years later were to show these measures were far from adequate as only a very low wall was put in place to stop pedestrians from crossing the line.